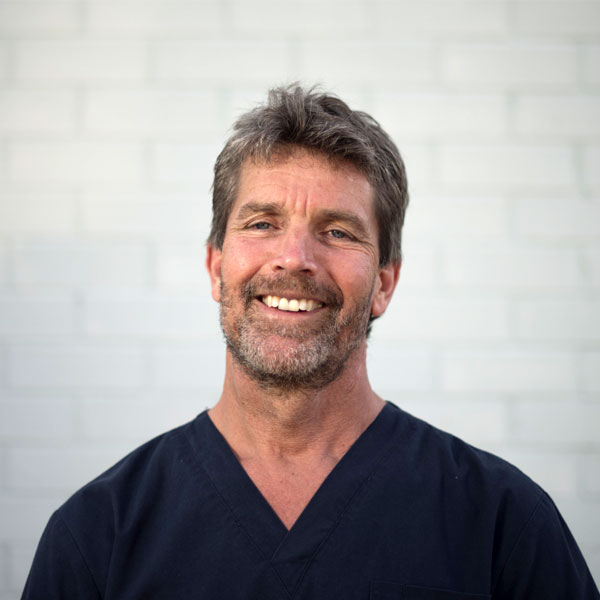 Immigrated to WA as 6 year old.

First job as Dentist for Government in the Pilbara.

Various private practice jobs after that.

Purchased a small practice in Rockingham 1987.

Grown from there with various moves of practice location around Rockingham.

To many people’s surprise Adrian was born in Scotland as his father was serving in the British Navy. Leaving to the next posting, 6 months later, there was no chance for Adrian to pick up a Scottish accent. The first years of school were in a small village north of London. Then the trip to Australia as “Ten Pound poms” in 1967. Adrian first school in Australia was at Calista Primary School as a 7 year old. He moved on to Kwinana Senior High School and did well enough to choose any University course. He deliberately chose the Dentistry course at The University of Western Australia over Medicine or Engineering as he was quite good with his mechanical work yet found the workings of the human body intriguing.

Adrian managed to complete his undergraduate dental course in the minimum of 5 years. Prior to graduation he had applied to the WA Health department, with the view of working in the Pilbara area, So after a short stint as a support dentist to The School Dental Service around Perth, he was off to Port Hedland. From Port Hedland he serviced the towns of Shay Gap, Goldsworthy, Telfer, Marble Bar and Wittenoom to name a few. This was a busy first year as a qualified dentist but Adrian was enticed to Karatha to work as a private dentist. From Karratha he did also hold clinics in Dampier and in Panawonica. This was all good experience but after a year Adrian was looking for more challenges and applied to be an assistant dentist in Wagin in “The great Southern” district of the South West. He was successful in acquiring this position and worked in Wagin for a year which was interesting but not ideal for him and his partner Maureen. A small clinic in Rockingham was advertised as a part time venture. Adrian purchased this clinic and Safety Bay Dental Care Centre was born.

For a while the Wagin Practice and the Rockingham practice were both operated by Adrian but eventually the decision was made that Safety Bay was the place to settle and focus on building a long term practice. He married Maureen and  started a family. Eventually having  4 children  who all went to the local schools in Safety Bay.

The Safety Bay Dental Care Centre, named and envisioned by Adrian in 1987.  Some 30 years later Adrian, Richard Grayson his Practice partner, and numerous assistants all continue to care for some  of the first patients who came through the doors at the first location for the clinic, Malibu Road. Over that 30 years the clinic has moved locations 3 times. From Malibu Road to Grange Medical Centre and most recently, in May 2017 to 90 Parkin Street Rockingham.

To provide a good foundation to any dental treatments, first the gum tissues must be evaluated, considered and treated

So why would some dentist say this? Don't dentist just [...]

Total and Optimal Health is the Goal

Western medicine evolved to treat the pregnant, unwell, the sick, [...]

So it is an unfortunate fact of life that as [...]